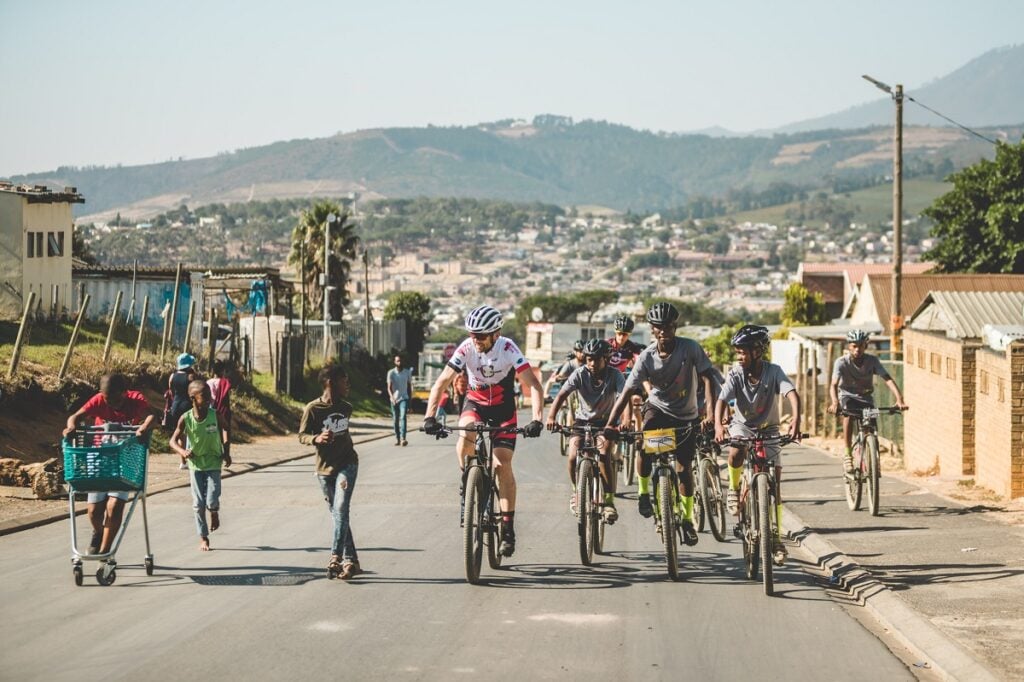 songo.info, the education and sporting charity founded by Christoph Sauser in 2008, will once again be represented by some of Specialized Factory Racing’s global superstars at the Absa Cape Epic. In 2022 the story goes beyond the elite men’s and women’s races however, as Sauser teams up with his former rival, Karl Platt, to target the NTT Masters’ category and two songo.info graduates pair up for the Exxaro Jersey competition. Ntlantla Nonkasa and Zola Ngxakeni, both spent their formative years in the programme and are now proudly racing in the songo.info colours and spearheading the charity’s fundraising drive.

“It’s an honour to race the Absa Cape Epic for songo.info,” Ngxakeni enthused. “I joined songo.info soon after the programme started in 2008, when I was 12 years old. Immediately I was hooked and just wanted to come ride bikes every day after school. Initially the focus of songo.info was just on bikes and cycling, but with the renovation of what’s now the clubhouse they created a space for more than just riding. songo.info is now more like a home. The kids can come; eat lunch, do their homework and receive extra tutoring on the subjects they’re struggling with at school.” 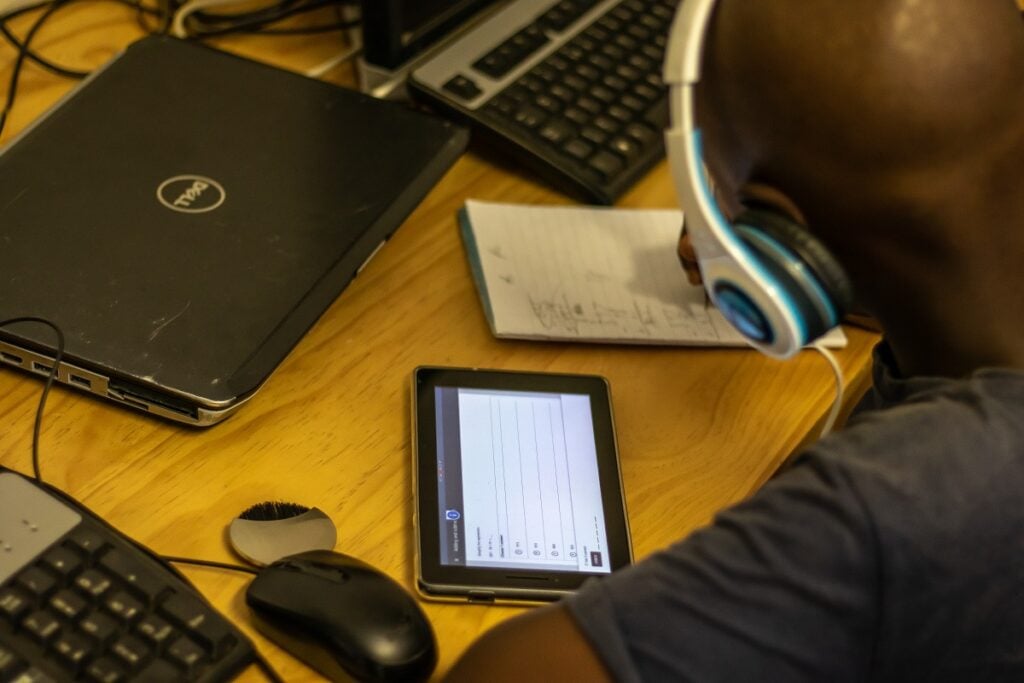 songo.info provides a place for children to do their homework and use learning aids, such as School in a Box and Reading Eggs, to improve their academics. Photo by Max Sullivan.

“During the day we see a lot of kids standing at the fence around the songo.info clubhouse,” Nonkasa added. “It’s such a pity that we cannot accommodate more children in the songo.info programme, as they don’t have much to do.” “Here, where we grew up, in Kayamandi, it’s very difficult. There’s a lot of gangsterism, a lot of drug abuse, a lot of alcohol abuse. Being part of the songo.info programme helped me stay away from those negative influences,” Ngxakeni explained. “If it wasn’t for songo.info I can’t imagine how my life would have turned out. This is why we would like to raise as much money as possible, to help songo.info help the next generation of Kayamandi’s young people. If we can raise enough to expand the programme that would be incredible!”

Nonkasa and Ngxakeni’s fundraising efforts are being supported by two of the Absa Cape Epic’s most legendary names, Christoph Sauser and Karl Platt. Both have won five editions of the race and were fierce rivals during their elite racing careers. Now, in their forties they are able to move beyond that rivalry and pair up in the NTT Masters’ category. Their participation, as songo NinetyOne Epic Legends, is sure to attract a great deal of media attention; which they hope to leverage for Sauser’s charity’s benefit.

songo.info graduates, Ntlantla Nonkasa (left) and Zola Ngxakeni (right) will be racing in the Exxaro Jersey competition of the 2022 Absa Cape Epic. The winners of that competition receive a R50 000 cash prize, the choice of a Curro Schools or STADIO tertiary education bursary each and a trip to Belgium’s Bakala Academy. Photo by Darren Epstein.

“We love racing, but we love racing even more for a good cause,” the songo.info founder said. “Seeing two songo.info youngsters, who got brought up through the programme, racing the Absa Cape Epic is an amazing experience; especially as they are now giving back, inspiring the kids in the community and raising funds. I’d like to appeal to all mountain biking fans to please help them to be successful in their campaign, it will make them so proud.”

Along with the Exxaro Jersey and NTT Masters category teams songo.info will also be represented by three teams challenging for the overall Absa Cape Epic titles. The pre-race favourites in the CM.com women’s competition, Sofia Gomez Villafane and Haley Batten are racing as NinetyOne-songo-Specialized. The Argentinian and American take up the baton of Specialized Factory Racing riders – like Sina Frei, Laura Stigger, Anna van der Breggen and the Queen of the Cape Epic Annika Langvad – as they take on the world’s premier mountain bike stage race. 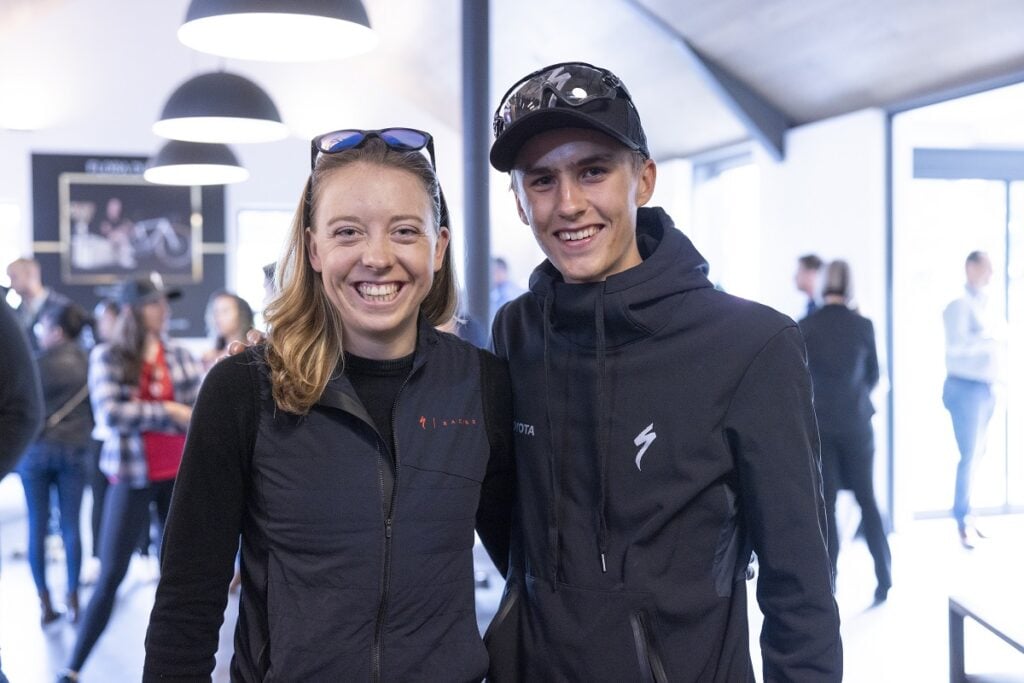 The men’s teams will be competing as Toyota-NinetyOne-Specialized, but will still have the songo.info logo proudly displayed on their kit. “It’s fantastic to have the defending Absa Cape Epic champion, Matt Beers, representing songo.info again,” songo.info Programme Manager, Sipho Madolo stated. “Along with the kids I’m really excited to see him teaming up with Christopher Blevins and looking to defend his title. We’re also thrilled to have the youngsters, Tristan Nortje and Cameron Mason racing for us. The support of Ninety One Asset Management and Specialized Bicycles goes far beyond the monetary funding they provide. They truly are partners in the education of each and every child that passes through our clubhouse doors. We’re exceptionally grateful for their shared long-term vision for our education and sporting programmes. Thanks to them, and Toyota, for creating such powerful mountain biking teams for the Absa Cape Epic and allowing us to use those teams to raise the profile of, as well as raise funds for, songo.info. 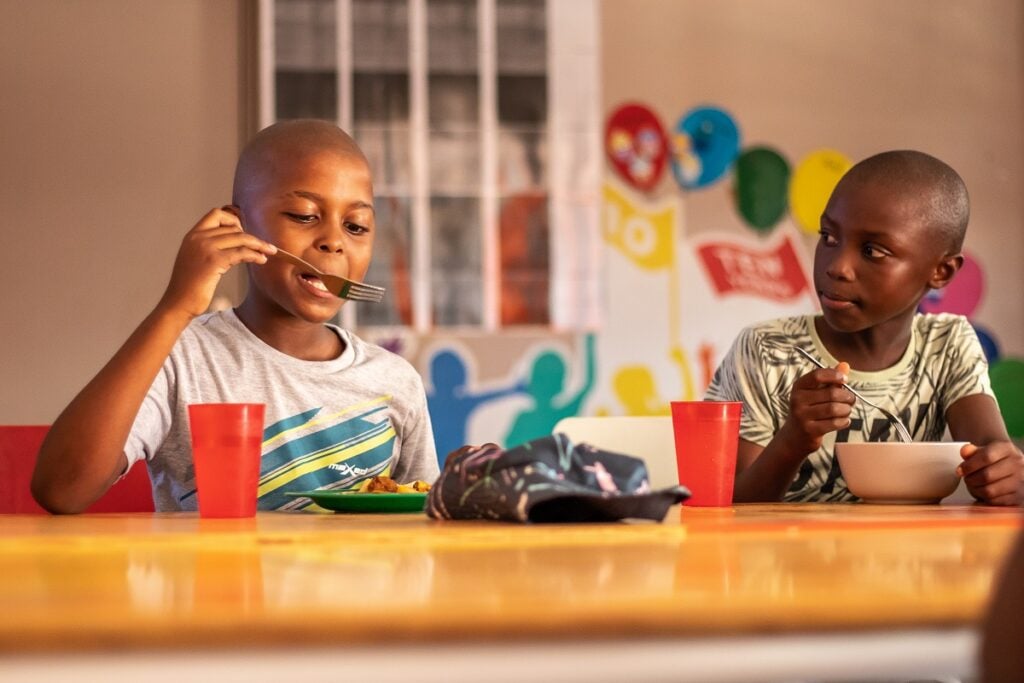 Mountain biking fans can follow the Absa Cape Epic, from 20 to 27 March, on the race’s social media handles and on the official live broadcast on www.cape-epic.com. For in-depth updates on the progress of the songo.info teams like the songo.info Facebook page, or follow @songoinfo on Twitter and @songoinfo on Instagram. Donation to the charity can be made on the www.songo.info website or via GivenGain. songo.info is registered as a Public Benefit Organisation (PBO) with the South African Revenue Services (SARS), as we meet the requirements set out in section 303 of the Income Tax Act No 58 of 1962. Donations by South African tax payers are thus eligible for a Section 18A receipt. 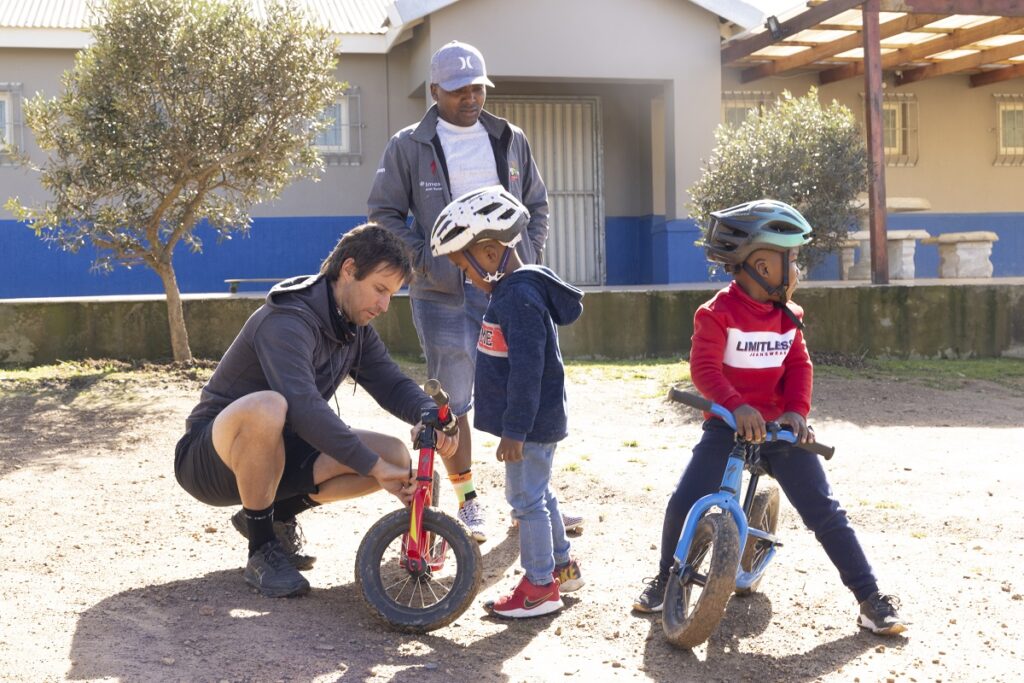 In 2021 the songo.info programme was expanded to include toddlers from local crèches who take part in the songo Tots programme where they receive a hot meal and learn to ride balance bikes. Photo by Raymond Cox.